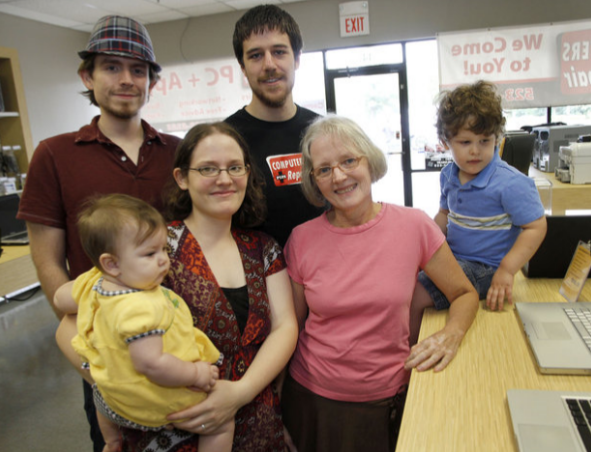 The Lexington Herald Interviews Aaron’s Family at Computers Plus Repair

Seth Collins, left (brother of Aaron Collins), Rachel Johnson (sister of Aaron), holding daughter Abigail, 7 months, Rachel’s husband Michael, Tina Rae Collins (mother of Aaron), and the Johnson’s son Elijah, 3, on Friday, July 13, 2012 at Computers Plus Repair in Lexington, Ky. Michael Johnson owns the repair shop. Even after death, Aaron Collins gives on. The technician at Computers Plus Repair died July 7. He was 30. His family wanted to honor his last request, which was to go to a restaurant for pizza and give the server a $500 tip. They raised money to go to Puccini’s in Lexington on July 10 where they surprised server Sarah Ward with $500. Brother Seth Collins and his family made a video to show donors how their money was spent. It went viral. Aaron’s brother Seth started a Web site, aaroncollins.org, to take money to "pay forward" big tips to other deserving servers. The site has raised over $20,000. Photo by David Perry | Staff HERALD-LEADER

The Lexington Herald came by the store Saturday to interview Aaron Collin’s family about the YouTube video Aaron’s Last Wish, which went viral last week (it currently has over 2.1 million views). Aaron worked at Computers Plus Repair up until his sudden death in July. Below is the related article from Kentucky.com.

[Update 9-2-12: Aaron’s family has since donated $4000 in honor of Aaron’s last wish. And they have been interviewed multiple times by various media outlets including the Today Show, CBS This Morning , and several others.  Visit aaroncollins.org for more updates.]

Even after his death, Aaron Collins gives on.

The technician at Computers Plus Repair died July 7. He was 30.

His family wanted to honor his last request, which was to go to a restaurant for pizza and give the server a $500 tip. They raised the money and then went to Puccini’s Smiling Teeth in Lexington’s Chevy Chase Place on July 10 and surprised server Sarah Ward with $500.

Brother Seth Collins and his family made a video to show donors how their money to honor his brother’s last wish was spent and posted it on YouTube.com.

Seth Collins started a Web site, Aaroncollins.org, to raise money to “pay forward” big tips to other deserving servers. At last count, $20,000 had been donated.

“I had absolutely no idea this would happen,” he said. “At some point, the Internet just grabbed hold.”

Ward, 29, the server who received the unexpected $500 in a stack of $20 bills, said she was stunned and at first had trouble understanding her good fortune.

In the back of her mind she was thinking about the Diet Coke she needed to get for one table and the bill that needed delivering to another, she said.

Her first reaction: “I was nervous about holding that much money.”

She shared her reward, giving $50 to each of the people who worked with her that day. She had $250 left over.

Ward is amazed to have become a sudden Internet star: “People in Australia are saying good things about me, and people in India.”

The Collins family had roots in Floyd and Pike counties, where the children were home-schooled, but the family now mainly lives in the Lexington area. Seth Collins said his brother had worked making pizzas and also had been a handyman before going to work for the computer repair store. He had studied construction management at Almeda University, a distance-learning college.

Michael Johnson, owner of Computers Plus Repair on Pimlico Parkway, is married to Seth and Aaron’s sister Rachel. He said Aaron Collins was such a diligent worker “he would stay after hours to mop the floor.”

“He had a respect for the working person,” Johnson said. “He always wanted to help people.”

Aaron Collins also loved his dog Lexi, a part husky, devoting a photo album to the canine on his Facebook page.

The family plans to hand out tips at other Lexington restaurants, but they realize that at some point they might become too easy to recognize, and friends might have to accept the assignment of tipping.

With donations rolling in, there will be plenty of opportunities for surprises. Servers are “a group of people who he felt were underappreciated,” Seth Collins said.

Buy & Sell Used Laptops – Computers Plus Repair in Lexington, KY
Aaron Collins Wish for the Homeless and Those in Need
Our Top Free Software List